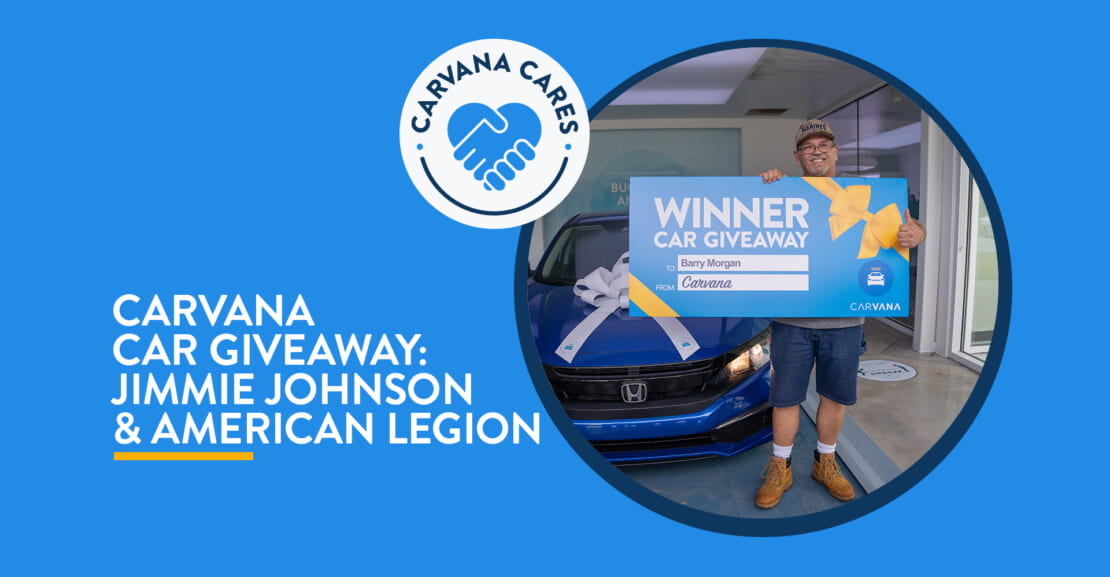 On August 18, 2022, Barry Morgan went to a Carvana car vending machine in Tampa, Florida. He thought he was attending a meet and greet with IndyCar driver and NASCAR legend Jimmie Johnson and receiving his American Legion membership. He was also going to pick up a brand new vehicle – even if he didn’t know it yet.

Morgan’s truck – a longtime source of stability and security – had recently broken down. Morgan reached out to St. Vincent de Paul CARES for assistance, asking if any veteran’s associations could help him finance a new car. Serendipitously, we had recently embarked on a venture with The American Legion to give away a car to a deserving veteran. When American Legion service officer and Department of Florida Veterans Affairs and Rehabilitation Chairman Alan Cohen heard about Morgan’s situation, he reached out to L. Cato – a case manager and emergency housing specialist at St. Vincent de Paul CARES – who shared Morgan’s story.

Morgan’s journey hasn’t always been easy, but it is a testament to his perseverance and determination to better his life. After learning about Morgan, Carvana and our partners at The American Legion lept at the opportunity to keep that upward spiral going.

On August 18th, Morgan traveled to the vending machine, where Jimmie Johnson was waiting, along with representatives from Carvana and The American Legion. There, Morgan received his prize – a 2019 electric blue Honda Civic.

“The marines don’t cry, but I do,” said Morgan after seeing his name displayed on a congratulatory sign on the vehicle. Morgan took the car out for a spin with Jimmie. He also received a membership to American Legion Post 5 in Tampa, presented by Cohen. Cohen drove four hours to watch Morgan receive the car – a commitment he didn’t think twice about making.

For Morgan, a new car grants better access to work opportunities – but it also means so much more. “I’ll get to visit my daughter and granddaughter, Ava, up in New Jersey and be able to do my laundry at the laundromat… I’ll help other veterans in the neighborhood out with rides if I can. I love helping people out. I’ve always been like that. I go out of my way to help people.”

For Morgan and millions of others across the U.S., a car is more than a simple means of transportation. It’s a key that unlocks access to family members and communities. We’re honored to participate in events that help people like Morgan gain the mobility and access they deserve.

Learn More About The American Legion

Chartered by Congress on September 16, 1919, The American Legion supports veterans and their interests. The Legion played a foundational role in lobbying for the 1944 “G.I. Bill,” helping World War II veterans acclimate to society post-war and playing an instrumental role in inspiring future veteran-oriented legislation.

Today, The American Legion has more than two million members across the U.S. The Legion’s mission is “to enhance the well-being of America’s veterans, their families, our military and our communities by our devotion to mutual helpfulness.”

Writing that NASCAR Cup Series legend Jimmie Johnson has had an accomplished career as a racecar driver would be underselling it. Johnson has 83 NASCAR Cup Series wins under his belt, including two Dayton 500 wins and four Brickyard 400 victories. In 2022, Johnson became a full-time IndyCar driver. He was named 2022 Indianapolis 500 rookie of the Year, making significant progress in his first year on the IndyCar circuit full-time. Johnson currently drives on Chip Ganassi Racing’s NTT IndyCar series team, and holds sponsorships from both The American Legion and Carvana.
Facebook | Instagram | Twitter | TikTok