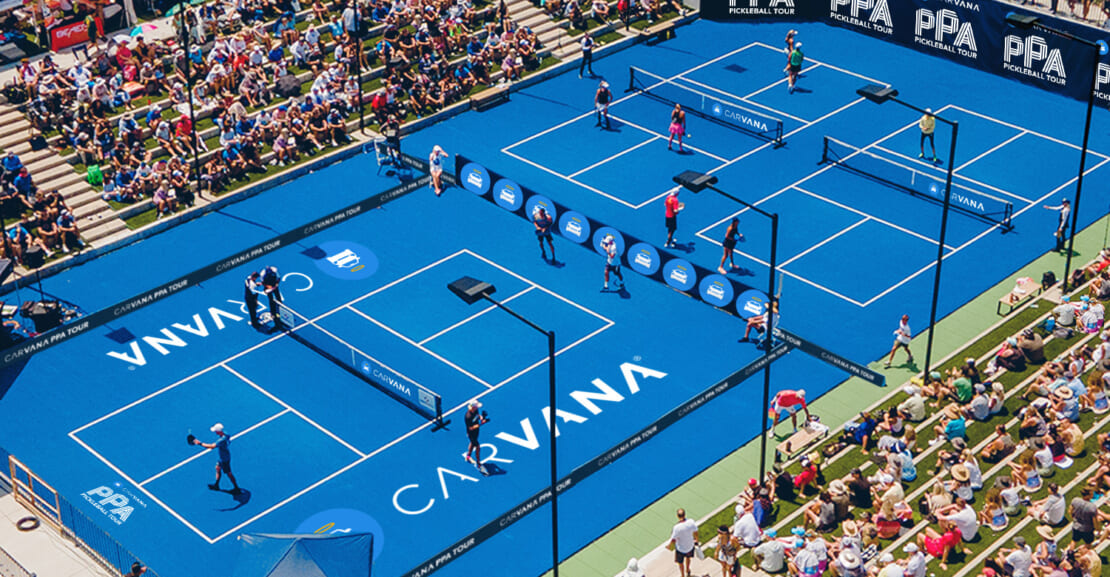 The year was 1965. U.S. Congressman Joel Pritchard had a problem: bored children. Namely, his son and his friends. So, Joel sat down with a couple friends of his own – Bill Bell and Barney McCallum – and cobbled together a game using a badminton court, ping-pong paddles, and a wiffle ball. Thus, pickleball was born.

The name “pickleball” has a couple of potential origins. Some say that Joel’s dog, Pickles, wouldn’t stop chasing the ball down – and thus, “Pickle’s ball” became “Pickleball.” Joan Pritchard, Joel’s wife, has a different story – “the name of the game became Pickle Ball after I said it reminded me of the pickle boat in crew where oarsmen were chosen from the leftovers of other boats” (presumably, a reference to how Joel and his friends cobbled the game together from the leftovers of other sports).

While the etymology of pickleball may be murky, one thing is clear: The sport’s skyrocketing popularity. A 2022 Sports & Fitness Industry Association report identified pickleball as America’s fastest-growing sport – which is why we’re thrilled to announce Carvana as the Professional Pickleball Association (PPA) title sponsor.

How Do I Play Pickleball?

Often described as a combination of badminton and tennis, pickleball uses a badminton doubles-sized court (20 feet by 44 feet) for both doubles and singles. Like a tennis court, there’s a net in the middle, with a non-volley line seven feet to either side of it, and the baseline, which marks the boundaries of the court, 22 feet to either side.

Although pickleballs look similar to wiffle balls, they must adhere to specific standards for tournament play. Pickleball paddles are up to two feet long and wide, and often resemble larger, more rectangular ping-pong paddles.

The team first to 11 points wins. Players rotate sides of the court at 6 points. Players can also play to 15 or 21 points (depending on the tournament), with rotations at 8 or 11 points, respectively).

Why Is Pickleball So Popular?

As we mentioned earlier, pickleball is America’s fastest-growing sport. The casual demographic is rapidly expanding – over 3.3 million people in the U.S. play pickleball, and the sport has avid fans and players in every age demographic. Pro pickleball is picking up steam quickly, too – LeBron James just bought a pro pickleball team.

It’s easy to see why…

We’re delighted to announce our sponsorship of the Professional Pickleball Association (PPA) ahead of the 2023 season (we’re hardly new to the sport – there’s a pickleball court in our Phoenix, Arizona headquarters). Effective January 1, 2023, the Carvana Professional Pickleball Association is set to serve up happiness to the millions of players and fans who have already flocked to the sport, positioning the sport to attract millions more this year.

Founded in 2018 in Salt Lake City, Utah, The Professional Pickleball Association is the premier professional pickleball circuit in the United States. The PPA awards millions of dollars in prize money each year, with tournament events in dozens of cities across Arizona, California, Utah, Nevada, Georgia, Florida, and more. In 2022, the PPA hosted more than 20 events at world-class facilities and has over 25 events and five major championships planned for 2023.

“At Carvana, we believe that driving happiness can extend beyond buying, selling and trading in cars. Our promise is to create joyful experiences for our customers at every turn, so this year we’re partnering with the Professional Pickleball Association to serve up smiles with the fastest growing community sport in America,” said Ryan Keeton, Carvana co-founder and chief brand officer. “In the same spirit as making vehicle ownership straightforward and accessible to everyone, we’re helping make pickleball one of the most accessible sports in America by championing players of all levels, all season long, with the sport’s premier professional league.”

The Professional Pickleball Association has cultivated a one-of-a-kind “Play Where The Pros Play™” atmosphere, leveraging its reputation as the premier provider of professional and amateur events in the rapidly growing pickleball space.

Carvana’s tech-focused approach has improved how people buy–and sell–cars, demonstrated by its industry-leading Net Promoter Score (NPS) and 4.7 out of 5-star customer experience rating average. Carvana continues to grow, now able to serve more than 80% of the U.S. population across more than 300 markets. With a continued focus on people-first values, industry-leading customer care, technology and innovation, Carvana has become the second-largest used automotive retailer in the U.S. and one of the fastest companies to debut on the Fortune 500.