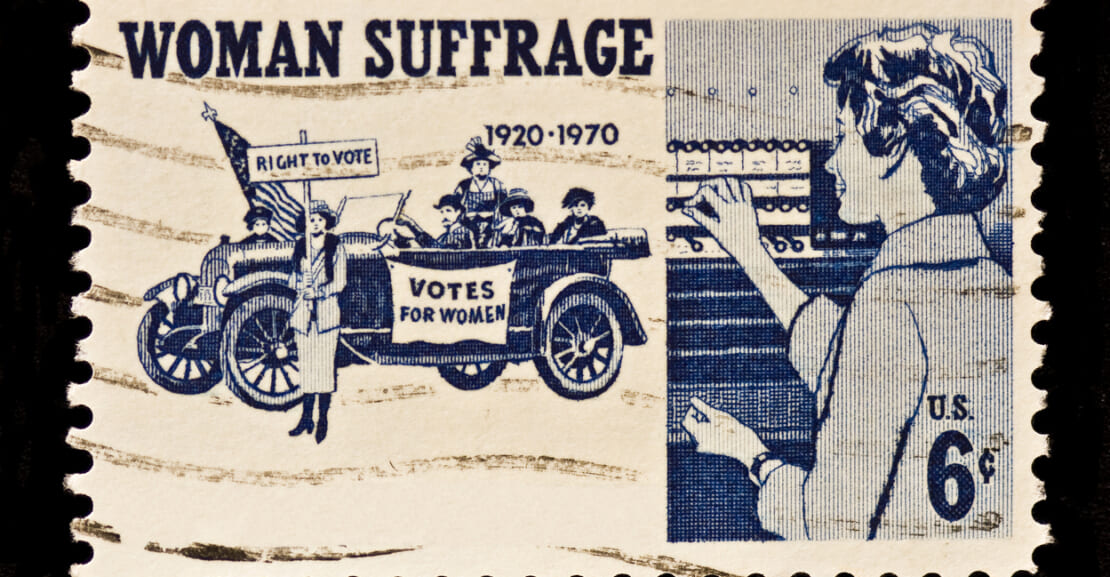 In 1916, Nell Richardson and Alice Burke drove from New York City to San Francisco. They traveled light, carrying a sewing machine, pistol, and evening gowns for speaking events. The car itself – a yellow Saxon garnished with flowers and “Vote for Women” banners – was the trip’s centerpiece, a moving cross-country platform for women’s suffrage.

As of August 2022, 85% of automotive production workers are men. Between 2020 and 2021, 60% of car buyers were male. Cars have long been seen as a “masculine” product from within the industry and without. That narrative downplays women’s contributions to the industry and the role cars played in publicizing women’s right to vote.

Today, we examine the history of suffrage and women’s rights as related to the vehicle and how the automotive and tech industries can be more inclusive moving forward.

When the car debuted as a piece of technology, it became the centerpiece of a culture war surrounding gender roles in early 1900s America. Immediately, vehicles started to reinforce a separation between men and women.

Marketed as a way for men to live further from work without missing opportunities due to travel time, the subtext of vehicle advertisements also confined women to the home. Even when automobile manufacturers started marketing a “second car” to families, they did so under the pretense of offering an easier way for women to shop or take the children out while the “man of the house” was at work.

Many male authors published sexist articles positioning women as unsuited for cars and/or driving with no factual or scientific backing, an effort to prevent women from entering “their” societal arena. Electric cars – then almost as popular as gasoline cars – saw a fall in popularity as sexist smear campaigns aligned them with female drivers.

Cars offered people more personal mobility than ever before. Unfortunately, they also further defined gender and class divides that harmed women and less wealthy citizens, pushing them to the edges of society.

The Car: An Unlikely Champion for Women’s Suffrage?

When cars became popular in the early 1900s, women had been pushing for the right to vote for over 80 years. With the advent of cars, suffragettes saw an opportunity to create country-wide education and awareness for their right to vote.

The result? Cars played a central role in many suffragist demonstrations, acting as “parade floats” that helped make the movement more visible. Many women also inserted themselves into the conversation of gender equality by joining local racing circuits or undertaking cross-country trips (a la Richardson and Burke), though they faced fierce opposition. After Joan Newton Cuneo – a female racing driver – saw success, the American Automobile Association banned Joan and several other successful female racers from competition.

It’s also important to note that, while the car ultimately helped women gain the right to vote, it also caused some division within the suffragist movement. Less wealthy suffragettes who could not afford vehicles or road trips were less publicized than those using cars as mobile political campaigns – and, as a result, more relegated to the sidelines of their movement’s public face.

Nonetheless, when women gained the right to vote in 1920, society made sure to note the impact of automobiles. In July 1919, shortly before women’s right to vote was made law, Motor Magazine published a piece titled “The Motor Car Pays Its Debt to Woman: How the Motor Car Has Aided in the Long Fight for Suffrage Now Happily Ending.”

The Automotive Industry in Recent Years: A Brief Retrospective

Despite playing an important role in many civil rights movements, the automotive industry has always been seen as male-dominated.

Ugly attacks on women in the industry and harmful stereotypes such as women being “emotional” or “flighty” behind the wheel didn’t stop with suffrage. For example, statements from auto engineers like “men don’t want women giving them directions” were commonplace when explaining why early onboard navigation systems would have male voices in the late 1990s.

To get a more in-depth perspective on the automotive industry, how it’s changed, and where it’s going, we asked some amazing Carvanians about their experiences working as women in tech and automotive. Here’s what they had to say:

“I started in this industry 15 years ago and have found more than a few challenges, one being balance between family and career. As a mom, I held about 75% of the daily responsibilities for my children and 100% of the responsibility for work, so finding balance was rough. The second challenge I saw/see is equal expectations of a female leader in this industry. I often had to prove a lot more than my male counterparts in the past to earn the respect of both my superiors and employees. This was more true early on in my career than now, but it still occurs.” – Eugena R., Fleet Maintenance.

“I started my career in the automotive industry, as the youngest communications professional within the largest global automaker and quickly found myself in a rigid corporate hierarchy dominated by men. While there were examples of closed-minded professionals whom I didn’t aspire to follow, I benefited from mentors, both men and women, who invested in my growth early on. Nearly twenty years later, that same company now has a female CEO, and the industry is eyes-wide-open to the importance of equity. I’m doing my part to lift others up and am motivated by the growing number of forward-thinking leaders and initiatives across a range of minority rights.” – Kristin T., Communications Team.

The Automotive (& Tech) Industries Now: A Work in Progress

At Carvana, we walk the line between two industries that have historically struggled with equality in the workplace. Here’s what our employees had to say about the current state of the automotive and tech industries:

“Women continue to be highly underrepresented in both fields, and the challenges lie with visibility. Trade and tech industries are heavily marketed to men, and we need systematic changes in our schools. Encouraging young women to STEM programs and trade industries will help close this gap and bring diversity to workplaces where it is desperately needed.” – Kristina C., Territory Manager.

“I think the automotive industry still has a long way to go to gain gender parity. There is still a very strong subconscious assumption that women are either not skilled or interested in jobs that require more technical skills versus soft skills. Carvana’s openness to letting employees make career moves across departments through programs like Lane Change is a great way to make us an industry leader in making these roles more accessible to underrepresented demographics. That being said, admitting there is a problem is the first step. Over the last several years, I think both automotive and tech have had a bit of a reckoning with the lack of diversity in these industries.” – Alyssa S., Market Operations.

“I am happy to say that from when I began, I feel it’s a night and day difference. I am no longer the only female leader in the room, and my male peers easily accept my presence – I also feel that many people see the unique value that female leaders offer in our industry. I feel strongly that I/We are recognized for our accomplishments and achievements, based on face value, and are seen as equals… I would love to see us build opportunities for the future. We need more females to look at this industry as an option and as a true career path. Schools and trade schools need to pull in my ladies, and the industry needs to place these opportunities in their path.” – Eugena R.

We’re committed to doing our part to further emphasize the importance of diversity and gender equality in automotive and tech. Looking toward the future, our employees said:

“Companies like Carvana are paving the way for women in tech and the automotive industry. Many people are surprised when they learn I am in the auto industry. Our Communities, such as WIT (Women in Tech), EmpowHer, and WAVEE (Women Advancing Visibility and Executive Enhancement) are helping to promote inclusivity for women and break down those barriers. There need to be more stories like Mary Barra becoming the CEO of GM, which was back in 2014!” – Kristina C.

“In my career at Carvana, I have been lucky to work with some amazing women who have created opportunities for other women and worked to uplift them. As we work to have more gender parity in all roles, particularly leadership roles, we will see quicker movement in the right direction. While a bottom-up approach works in many areas, when it comes to diversifying a workforce, a top-down approach has to be taken as your leaders are making decisions around hiring. A more diverse hiring team will always lead to more diverse teams.” – Alyssa S.

I certainly won’t be able to end this blog with a better statement than the following from Communications Team member Kristin, so I’ll let her take it away:

“In transforming the way people buy and sell cars online, Carvana is focused on meaningful change while also “walking the talk” by showing we are better together. Carvana values are grounded in everything we do, our culture is special, and our leaders promote a company-wide view on the total wellness of all team members to ensure a fulfilling experience across any lifestyle or need.”