Why Tesla vs. Muscle Car Drag Race Is a Null Point – Muscle Car

Car Deals Near You > Research > Uncategorized > Why Tesla vs. Muscle Car Drag Race Is a Null Point – Muscle Car

Why Tesla vs. Muscle Car Drag Race Is a Null Point – Muscle Car 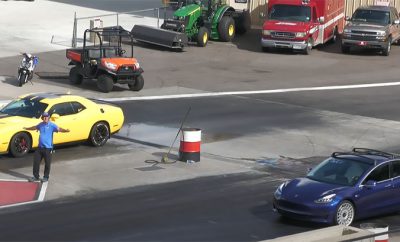 From initial impressions, the latest and greatest EV up against the best the muscle car world can offer in a drag race seems like a good idea. Electric motors up against the tried and tested, no replacement for displacement, internal combustion engine. Some would call it the old against the new. While another viewpoint is measuring up two completely different technologies.

We all know that electric vehicles are coming soon like an unstoppable tsunami wave, which also includes electric muscle cars. But, those already invested in electric vehicles, want to prove a point against the ICE and vice versa.
ICE vehicles want to prove they are still relevant, and EV’s to prove they are the future. However, the comparison is a bit like measuring up 100m world record holder Usain Bolt against Wayde van Niekerk, the current 400m record holder. Completely different engines optimized for different events.

This means that the drag strip which was once the preserve of the best ICE vehicles is now the ideal platform for EV’s. Over a quarter-mile distance, an EV is very quick off the mark. However, if the race was over a mile or two, the result could be very different. But, in the video above, the muscle cars with their internal combustion engines, aren’t that far behind in most cases. Driving skill has a lot to do with the final results, but we can’t really test that one yet until all-electric vehicles in the future have autonomous driving capabilities.

In a few year’s time, Dodge should release the first electric muscle car. From that point onwards, there is sure to be a slew of videos of Tesla’s lining up to challenge whatever Dodge all the others have in store.

Both vehicle types have their pros and cons. But, in the drag race video above, the 1968 Dodge Dart still performs very respectably with a 11.912 time against the Telsa at 11.462. Not too shabby for a 50 years engineering difference.
You could argue that the Dodge Dart needs an engine that can drink a bathtub of fuel every second to keep up. However, the Tesla also needs loads of heavyweight batteries to do the job.

Therefore, electric versus an ICE vehicle is really a comparison of different technologies. On the surface, it’s a fun comparison to see what naturally comes to us, who is the fastest. But the real fun will start when all muscle car manufacturers have their own electric versions, and are ready to hit the dragstrip for the next generation.